How Could Our Church Leadership Let It Get This Bad? 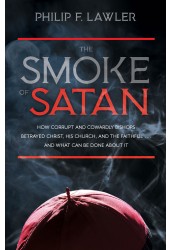 I’m reading Phillip Lawler’s new book, The Smoke of Satan:  How Corrupt and Cowardly Bishops Betrayed Christ, His Church, and the Faithful…And What Can be Done About It (Available at TAN Press ).  For those of us who have managed to pull our heads out of the sand and acknowledge that the Church is indeed facing a crisis of massive proportions, one of the questions we often find ourselves asking is this:  Why didn’t the Bishops and the Popes DO something?!?!

Bishop after bishop assures us with wide-eyed breathless sincerity that “Gosh!  I had no idea that Father X or fellow Bishop Y or Cardinal Z was doing that!  I’m as shocked and disturbed as you are…” And far too often, the tangible evidence backs up their claims, no matter how implausible they seem.  Some of them, perhaps, really are clueless rubes that had no inkling that such evil was taking place under their noses or in the diocese next door.  If that’s the case, then they’re lousy leaders at the very least.  Others knew full well what was going on, and took “plausibly deniable” steps to suppress knowledge of the crimes.  Still others (Lord help us!) may have been active participants in the evil.

But there are also too many clerics and prelates who simply convinced themselves that nothing bad was actually happening.  They have been behaving like those “See no evil, hear no evil” monkeys we are all familiar with.

None of the above postulated explanations are very reassuring.  Regarding the third category of clergy, Mr. Lawler offers the following explanation in his book:

Two common human traits strengthen the tendency to avoid problems.  One is the normal desire to avoid unpleasant confrontations.  The role of a pastor is to unite, not to divide, and most priests are not aggressive personalities.  The other, closely related factor is the willingness to give everyone the benefit of the doubt.  In combination, unfortunately, these two characteristics–healthy and even laudable in themselves–can produce a sort of cockeyed optimism or willful blindness, a stubborn refusal to recognize reality.  We want to see virtue in others, and sometimes we can only see if our eyes are shut tight.

“OK,” you say, “so we have some real jerks in our parishes and dioceses.  Why didn’t the Pope do something?  Pope Francis seems weak in this regard, but what about Pope Benedict XVI or Pope Saint John Paul II?  And not just regarding criminal conduct, but what about all the heresy, disobedience, and doctrinal dissent?”  That latter part of the question is crucial.  Although it may not appear to be linked with the current lavender mafia/sex abuse crisis, believe me:  it is!

For the sovereign pontiff, pastor for the universal Church, there is another consideration that weighs against stern disciplinary measures.  The duty of the Roman pontiff is to preserve unity among the faithful.  If he cracks down on abuses–any sort of abuses–the pope, any pope, might risk dividing his flock.  If he demands that recalcitrant priests and theologians end their dissent from formal Church teaching, they may choose instead to leave the Church, bringing their followers with them.  Rather than risk schism, the pope may choose to accept an uneasy truce between Catholic factions that seem irreconcilable.  This, it seems clear, was the path chosen by John Paul II and Benedict XVI.

This tendency, this reluctance to address a problem head-on has been with us for some time, as Mr. Lawler points out:

If Church readers are prone to overlooking current problems, they are equally likely to downplay past failures.  Despite the grave losses that Catholicism has suffered during the past fifty years–the thousands who have left the Church, the families that have broken apart, the priests and religious who have forsaken their vows, the parishes and schools that have been closed–bishops remain reluctant to calculate the total damages and identify the root causes of the disaster.

In the years following Vatican II, thousands of priests walked away from their duties to begin a new life in the secular world.  When they left, there was no formal announcement.  The rumor mills buzzed, but there was no explanation of their departure.  They simply disappeared…Wouldn’t a healthier institution have been more forthright, admitting that these young priests had deserted their ministry?…for those who embraced a false optimism or willful blindness, it seems pointless to dwell on painful memories.  Far better to speak confidently about the future!

Just be glad the USCCB isn’t running the FAA.

Imagine a series of disastrous airliner crashes, one after another, and now try to imagine the Federal Aviation Administration delicately avoiding any mention of the crashes or investigations into their causes, but instead blithely opining about how much air travel safety is improving, and how bright the future for the airline industry looks!  Pretty darn absurd.

But that’s the attitude what passes for Church leadership these days is taking.