What the..? Can ANYONE explain this to me with a positive spin?!

Can ANYONE explain this to me?  On the eve of the Amazon Synod, this happens…
———————
Pope Francis received James Martin, S.J., in a 30-minute private audience in the papal library of the Vatican’s Apostolic Palace this morning, Sept. 30, in what is seen here as a highly significant public statement of support and encouragement for this U.S. Jesuit.

Father Martin is well known as a public speaker, author and for his pastoral
ministry to L.G.B.T. people.

Full Article can be found in the magazine America published by (of course) the Jesuits. Seriously, readers: somebody explain to me how this is a good thing for our Catholic Faith?

This venerable old warrior for the Faith turns 78 this week. Please continue to support Abp. Viganò in your prayers.

And, while you’re at it…why not write your local bishop and let him know that you support Abp. Viganò, that you consider the allegations in his written testimonies to be accurate and worthy of intense scrutiny. Ask your bishop–very pointedly–whether he supports Viganò or not? (And if not, why the heck not?!)

Need a quick refresher on the various statements our man Viganò has made, each of which made the Lavender Mafia and the Boys from St. Galen very nervous? Take a look at the following list, kindly provided by LifeSiteNews (which is a great resource, by the way!):

And, while you’re still at it…Sign LifeSite’s petition for Archbishop Vigano here.

Another Day. Another Injustice…

How is it that heterodox (to put it mildly) “celebrity priests” are feted, praised, wined and dined by our bishops, but the orthodox priests who are trying to shine a light on the scandals destroying Holy Mother Church are disciplined and suppressed?

I guess you can chalk it up to the “Lavender Mafia” continuing to do its thing…and do it well.

LifeSiteNews published an article describing the treatment of Fr. Mark Goring, a “regular guy” kind of priest who had developed a decent sized following on YouTube. I guess you could call him a “celebrity priest” of sorts owing to his online audience, but he’s certainly no media darling like superstar Fr. James Martin.

Fr. Goring has spent the last few months attempting to shed light on what he calls the “corruption network” at work in the Church. We all know it’s happening, and we laity have wondered why more priests and bishops aren’t stepping forward to call the powerful and corrupt to account for their misdeeds.

Well, Fr. Mark tried…and boy, was he smacked down for it!

Fr. Mark’s “cease and desist” video was archived and can be viewed HERE.

Viganò to McCarrick: Time is Running Out!

A few months ago, LifeSite News reported a new letter from Archbishop Viganò.  This letter (see below) urged disgraced pederast Theodore McCarrick to repent, reminding him that “Time is running out, but you can confess and repent of your sins, crimes and sacrileges, and do so publicly, since they have themselves become public. Your eternal salvation is at stake.”

Pray for McCarrick that he can repent in time, and that as his penance he comes clean about not only his crimes, but the entire ball of wax:  the Lavender Mafia, the homoheresy rampant in the Church, the St. Galen conspiracy…everything!  McCarrick’s immortal soul isn’t the only thing in jeopardy:  his ongoing silence continues to damage Holy Mother Church, and continues to imperil the soulds of many Catholics whose faith is being shaken by these crimes and scandals.  Pray also that the Pope steps up and aggressively addresses these problems as well.

As has been reported as a news by the Congregation for the Doctrine of the Faith, the accusations against you for crimes against minors and abuses against seminarians are going to be examined and judged very soon with an administrative procedure.

No matter what decision the supreme authority of the Church takes in your case, what really matters and what has saddened those who love you and pray for you is the fact that throughout these months you haven’t given any sign of repentance. I am among those who are praying for your conversion, that you may repent and ask pardon of your victims and the Church.

Time is running out, but you can confess and repent of your sins, crimes and sacrileges, and do so publicly, since they have themselves become public. Your eternal salvation is at stake.

But something else of great importance is also at stake. You, paradoxically, have at your disposal an immense offer of great hope for you from the Lord Jesus; you are in a position to do great good for the Church. In fact, you are now in a position to do something that has become more important for the Church than all of the good things you did for her throughout your entire life. A public repentance on your part would bring a significant measure of healing to a gravely wounded and suffering Church. Are you willing to offer her that gift? Christ died for us all when we were still sinners (Rom. 5: 8). He only asks that we respond by repenting and doing the good that we are given to do. The good that you are in a position to do now is to offer the Church your sincere and public repentance.  Will you give the Church that gift?

I implore you, repent publicly of your sins, so as to make the Church rejoice and present yourself before the tribunal of Our Lord cleansed by His blood. Please, do not make His sacrifice on the cross void for you. Christ, Our Good Lord, continues to love you. Put your entire trust in His Sacred Heart. And pray to Mary, as I and many others are doing, asking her to intercede for the salvation of your soul.

“Maria Mater Gratiae, Mater Misericordiae, Tu nos ab hoste protege et mortis hora suscipe.”  Mary Mother of the Grace, Mother of Mercy, protect us from the enemy and welcome us in the hour of death.

Your brother in Christ,

Sunday, January 13, 2019
The Baptism of the Lord
Saint Hilary of Poitiers

Some new developments in the ongoing Church crisis.  The bishops are going to really have their work cut out for them when they meet in February to address the whole homosexualist abuse crisis demolishing the Catholic Church.  They’ve devoted two whole days to the synod, so CCM is sure they’ll get everything wrapped up in plenty of time to make their flights out of Rome…or not.  The news just keeps getting worse.

The links below are worth investigating:

O’Malley Drops a Dime on Dolan

This just in from ChurchMilitant.com

Cardinal Sean O’Malley has contacted the Papal Nuncio to report a case of homosexualist predatory abuse, which was allegedly covered up by New York’s Cdl. Timothy Dolan.

In a letter dated Dec. 21, O’Malley draws the nuncio’s attention to the case of Fr. Donald Timone, a priest of the archdiocese of New York, whom Dolan allowed to remain in active ministry — even calling him “remarkably tender and holy” in 2013 — after he knew of the credible allegations of sex abuse.

There’s another bit of muck in the whole Fr. Timone mess.  According to a report by the Catholic News Agency ( catholicnewsagency.com ), the Archdiocese of New York had vouched for the disgraced priest earlier this very month!

On Dec. 4, the New York archdiocese issued a letter stating “without qualification” that Fr. Donald Timone had “never been accused of any act of sexual abuse or misconduct involving a minor.”

In fact the archdiocese first received in 2003 an allegation that the priest had sexually abused minors, and it reached settlements with alleged victims in 2017.

The archdiocesan letter was received Dec. 13 by John Paul the Great University in Escondido, California, where Timone served. According to the university, the letter was not rescinded until after university officials contacted the Archdiocese of New York, following a Dec. 20 New York Times report on the history of allegations against Timone.

Other Developments in Abuse Cases

Crux ( cruxnow.com ) has published an update on several ongoing abuse cases, the most recent of which is the sentencing of PA priest Fr. John T. Sweeney for molesting a boy in the 1990’s.

Sweeney, who retired in 2016, is the first priest convicted of charges stemming from a Pennsylvania grand jury investigation that focused on allegations of abuse. He was arrested in July 2017 for the incident that occurred during the 1991-92 school year at St. Margaret Mary School in Lower Burrell, about 25 miles northeast of Pittsburgh…

…Meanwhile, the Archdiocese of New York suspended an elderly priest who had been celebrating Mass in two states despite settlements paid for allegations of sexual abuse of teenage boys.

Keep praying that the men entrusted to her leadership will finally become the men God always intended them to be. 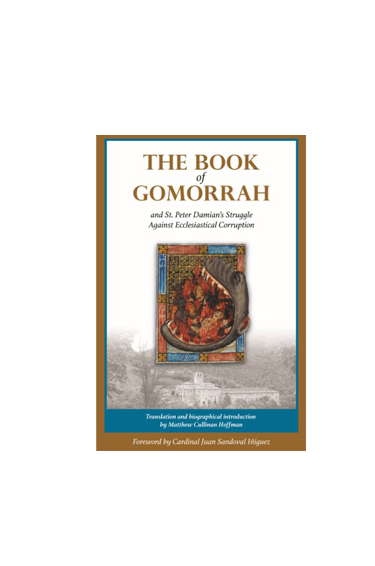 Although it was written almost a thousand years ago, the Book of Gomorrah is in many ways addressed to our own times, associating the phenomena of clerical homosexuality and pederasty, and endorsing the imprisonment of clergy who are a danger to youth.

Look at St. Peter Damian’s introduction to his book:

“Alas, it is shameful to speak of it! It is shameful to relate such a disgusting scandal to sacred ears! But if the doctor fears the virus of the plague, who will apply the cauterization? If he is nauseated by those whom he is to cure, who will lead sick souls back to the state of health?”

This amazing book is available at Ite Ad Thomam Books and Media.  Here is the link:

Bonus!  If you happen to be a subscriber to LifeSite News, you get a discount!

The hunt is on for the “renegade” Archbishop!  In the wake of his bombshell eleven page letter which named quite a few names, more than a few high-ranking prelates are ticked off.  According to some press reports, the Vatican is actively seeking the whereabouts of Abp. Viganò, and has dispatched agents to locate him.  Fearing for his life, Abp. Viganò has  gone into hiding.  From an undisclosed location, Viganò has written two additional letters.

Pray for Viganò’s safety during this time of crisis.  Pray that his allegations be investigated fully, and pray to Our Lady that our beloved Church will emerge from this present tribulation stronger and holier!