I get excited when I see a bishop brandishing a Louisville Slugger.  I’m hoping that he’s going to smash a couple of those Pachamama statues, but alas, that’s rarely the case these days.  It’s more likely that he’s going to take a swing at Catholic dogma instead.

Bishop Rick Stika of Knoxville made waves on social media the last week of November 2019 by making some outlandish statements on Twitter regarding the worship of Jesus during Mass.  As of the time of this posting, you can’t find those direct quotes on Twitter (they’ve been taken down, it seems), but as they say, “The Internet is forever.”

Here they are for your consideration: 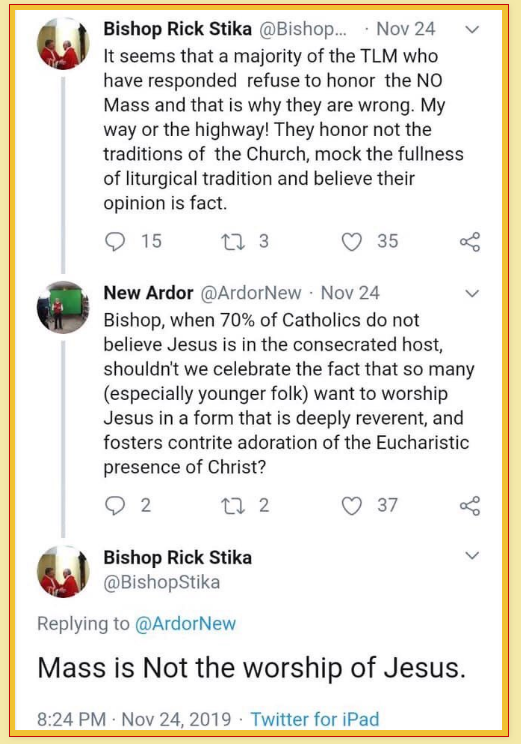 And certainly heterodox.  Why would a bishop even say such a thing?  Is he one of those post-Vatican II “the Mass isn’t a sacrifice, it’s a community meal” kind of guys?  Did he simply misspeak?

Anyone can make a mistake on Twitter, especially with that darned talk-to-text feature!  (Who hasn’t gotten themselves into trouble using that on a smart phone?!)

But we also have this:

As a bit of a rebuttal to the good Bishop (whom we should all pray for), please consider this short video:

Resisting the Pope: Is it time?

I thought we had hit rock bottom in 2018, but boy, was I wrong.  2019 has been one whopper of a year when it comes to inexplicable and hurtful actions by our Holy Father, Pope Francis.

With a sad smile to my sedevacantist friends, yes I still do call him my Holy Father.  Abusive as my spiritual father may be, I still need to pray for him.  It’s difficult to simply pray for “the intentions of the Holy Father,” because I frankly mistrust his intentions.  What I do pray for is his conversion.  For his return to orthodoxy.  For God to mold him into the man He truly intends for him to be.

And, in the meantime, I will–to whatever extent I am able, pathetic though it might be–resist the Holy Father when he’s wrong.

It’s difficult for me to put into words the pain and sense of betrayal I feel when I consider how Pope Francis has led our Catholic Church.  Perhaps you feel the same way.  May I recommend the Open Letter to Pope Francis penned by Michael Matt of The Remnant newspaper.

You can read the letter at the link above, or you can hear it in this moving video:

The Apostates are Coming!

Emboldened even further by the Amazon Synod, apostates and modernists are on the march.  Hank Igitur and Mr. Dogma spread the alarm.

Pachamama Sleeps With the Fishes

Hank Igitur and his associate Hermann Utic discuss the first encouraging news we’ve had from this disastrous Synod on the Amazon.

Probably a good time to redouble our prayers to St. Michael…

If you’ve been paying attention (and if you’re one of the dozens of readers here at CatholicCyber-Militia.com, we know you have been!), you know that our beloved Church is in the midst of an unprecedented crisis.  With the Amazon Synod howling at the gates, there’s no better time to ask once more for You Know Who to defend us in battle!

An Urgent Request for Prayer & Fasting

Hopefully, the readers at CatholicCyber-Militia.com (all two dozen of you!) have been paying attention to the fact that this October there is going to be another synod going on.   This time it’s the Special Assembly of the Synod of Bishops for the Pan-Amazon. (That’s the full title; normally it’s just shortened to the “Amazon Synod.”)

And, if you’ve been paying attention, you know that some of the proposals being put forth in the working document (Instrumentum Laboris) of the synod are quite controversial.  Some have called them dangerous…or worse.

The concern for the impact which the Amazon Synod might have on our Church is significant enough that two leading prelates have issued an urgent prayer request.  Raymond Cardinal Burke and Bishop Athanasius Schneider have requested a “Crusade of Prayer and Fasting to Implore God that Error and Heresy do not pervert the coming Special Assembly of the Synod of Bishops for the Pan-Amazon.”

Cdl. Burke and Bp. Schneider lay down a detailed description of the prayer and fasting request, the reason for making the request, and provide an extensive summary of the grave concerns they have about the material in the working document.

Various prelates and lay commentators, as well as lay institutions, have warned that the authors of the Instrumentum Laboris, issued by the secretariat of the Synod of Bishops, to serve as the basis for discussion in the coming Special Assembly for the Pan-Amazon, have inserted serious theological errors and heresies into the document.

We invite Catholic clergy and laity to participate in a crusade of prayer and fasting to implore our Lord and Savior, through the intercession of His Virgin Mother, for the following intentions:

We propose a forty-day crusade of prayer and fasting to begin on September 17 and end on October 26, 2019, the day before the conclusion of the Special Assembly of the Synod of Bishops for the PanAmazon. Anyone who first learns about the Crusade after the date of its beginning can naturally join the Crusade at any point.

During the forty-day crusade of prayer and fasting, we propose to pray daily at least one decade of the Holy Rosary and to fast once a week for the above mentioned intentions. According to the tradition of the Church, fasting consists in eating only one full meal during the day, and additionally, one may eat up to two smaller meals. Fasting on bread and water is also recommended to those who are able to do so.

It is our duty to make the faithful aware of some of the main errors that are being spread through the Instrumentum Laboris. By way of premise, it must be observed that the document is long and is marked by a language which is not clear in its meaning, especially in what regards the deposit of faith (depositum fidei). Among the principal errors, we especially note the following…

The letter in its entirety can be found here:  Crusade of Prayer and Fasting to Implore God that Error and Heresy do not pervert the coming Special Assembly of the Synod of Bishops for the Pan-Amazon or at the following link:

Recognize & Resist: A Strategy Worth Considering

Frustrated by the ambiguous pronouncements coming from Rome?  Worried that this never-ending parade of synods has the potential to play havoc with the true teachings of the Church?  Concerned that Pope Francis might be saying some stuff which simply doesn’t square with two thousand years of consistent Church teaching?

Yeah, us too.  Hank Igitur’s been reading a new book by Dr. Taylor Marshall which does a pretty decent job of putting this whole situation into a long-term historical perspective.  He offers a strategy for prayerfully (and charitably) dealing with this crisis.  Hank’s 100% onboard with this approach and he’s willing to explain it to you in (possibly tedious) detail!

Links Mentioned in this Video:

Infiltration: The Plot to Destroy the Catholic Church From Within by Dr. Taylor Marshall is available at Amazon.com or through Sophia Institute Press.  The book makes a pretty darn solid case that our present crisis doesn’t have its beginning with the election of Pope Francis, the suppression of the Latin Mass in the late ’60’s/early ’70’s, or even the Vatican II!  The crisis began well over a century earlier.  Fascinating stuff!

The document Hank mentions which can help you cut through some of the confusion when it comes to getting the real deal on Church doctrine is this:  “Declaration of the Truths Relating to Some of the Most Common Errors in the Life of the Church of Our Time.”  It’s only eight pages but it gives you an easy to read no-nonsense summary of authentic Church teaching, clearing up some points that might have become, umm, well–a tad murky let’s just say–over the past few years.