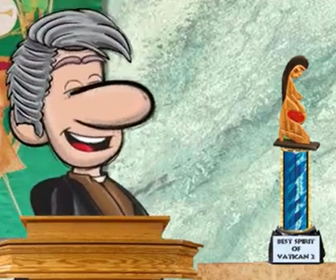 We’ve been hearing a great deal (too much, really) from Germany these past few months. If you’ve been paying attention, you know what an absolute Modernist trainwreck their Teutonic Synodal Process has been.

But there’s good news! Those whacky Germans remain masters at liturgical innovation. They know how to bust a move in Regen-Langdorf, Bavaria! Father Andreas Artinger dances with altar servers at Easter to Dr Alban’s 1993 “Sing Halleluja,” and guess what? He’s danced his way to our second Novie Award! Filmed before a live studio audience at St. Silly’s parish, the Novie Awards recognizes the ground-breaking efforts of liturgical innovators around the world! Receiving a Novie award in recognition for your achievements in novelty, entertainment, and exciting reinterpretations of doctrine is what this show is all about! Special thanks to Gloria.TV for bringing this little gem of Novie Nonsense to our attention.

Traditional Catholics: You know that your days are numbered! Here at CCM, we want to ease your transition by providing you with top-notch training for your mandated transition to the Novus Ordo Mass. With our highly-acclaimed video series “Traditiones Custodes-101,” you will learn everything you need to know in order to comply with the diktats of Traditionis Custodes.

Traditional Catholics MUST get with the program when it comes to post-Vatican II musi.! In Lesson 4 of TC-101, we show you how! As a bonus feature, Amazon Bob offers an explanation of the Hermeneutic of Continuity that will clear everything up. The New Mass is in perfect sync with the Old Mass, except for the fact that the Old Mass is old, bad, rigid, and probably illegal. Special thanks to @Ipsitilla for providing the voice of Wendy the Cantor. Check out her YouTube Channel!

You may have heard of Traditionis Custodes (TC) which ironically translates as “Guardians of the Tradition.” It’s a Motu Proprio (a diktat, really) intended to be the first of several brutal steps intended to wipe the Traditional Latin Mass from the face of the Earth.

The Vatican’s plan is proceeding apace. Part of the plan, of course, involves a…shall we say…re-education of Traditional Catholics as they are forcibly repatriated with nearby Novus Ordo parishes. To help that effort along, we’ve instituted a new series of informative training videos called “TC-101.”

Our animated series takes place at a parish called Saint Silly’s. And believe you me, the good folks at St. Silly’s are as Novie as they can possibly be! Why, they even have built their own charming “Synodal Path” on the parish grounds! Click the video below and take the tour! At the end, you’ll agree that St. Silly’s is indeed a Vatican II architectural triumph!