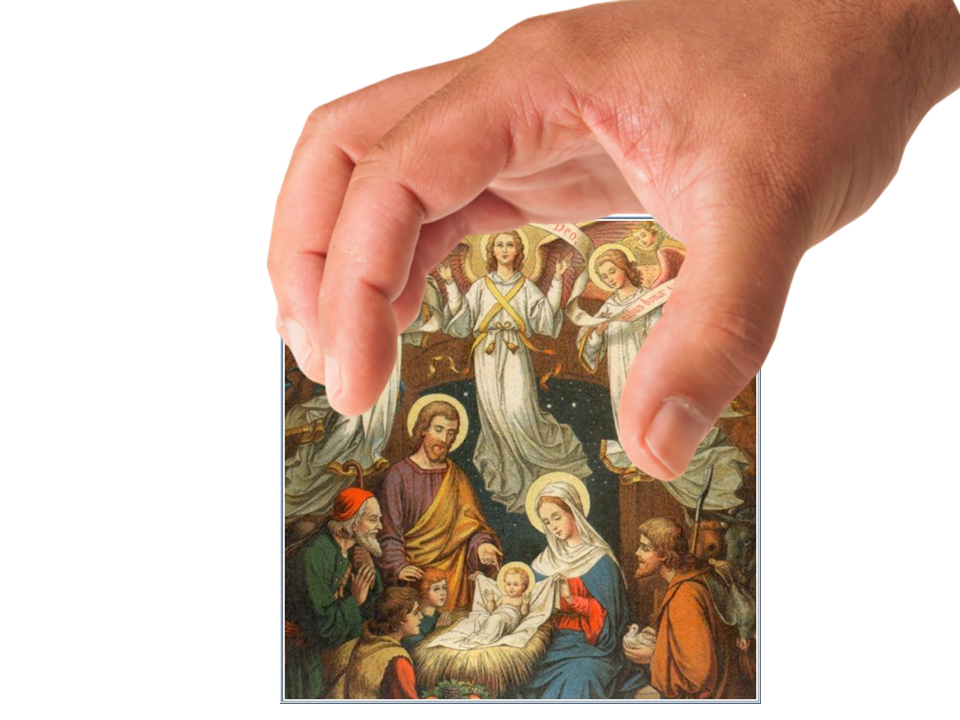 It’s a thing that’s all the rage in our politically-correct culture (“rage” in the sense that it’s wildly popular and also “rage” in the sense of those who delight in virtue-signaling their imagined outrage at something unspeakably offensive):  If you dare to don a sombrero but you’re not Mexican, that’s “cultural appropriation.”  It’s a BIG no-no these days.  At best, those guilty of cultural appropriation are insensitive and ignorant.  At worst, they’re intentionally evil bigots or racists, probably both.  It’s all part of the Snowflake Syndrome rampaging through college campuses and trendy social circles.

And that got me thinking.  If it’s inappropriate for somebody to wear garb considered unique to one particular race, nation, or culture, why is it not considered inappropriate to hijack the second most important holiday for a billions of Christians and use it as an occasion for commercial profiteering, donning the stylized garb of a completely misunderstood/mischaracterized Catholic saint, or trivializing it with the addition of reindeer and dancing snowmen?

Take that peppermint chip off your shoulder.

Should Christians take offense when we see people who are obviously clueless about our holiday going to great lengths to appropriate the holiday for their own use, tossing out doctrines they find uncomfortable while retaining the emotionally-satisfying portions (and adding ridiculous components of their own invention to boot)?  Would a Muslim tolerate such behavior by the population at large during Ramadan?  (Imagine for a moment a clever ad agency executive who invents “Robbie the Ramadan Raccoon” as an appealing way to sell toys and seasonal apparel to celebrate the holiday…that kind of hijacking of a religious holiday probably wouldn’t be too well-received.)

If we’re bold in proclaiming our faith, we might respond with a gentle reminder like “Jesus is the Reason for the Season,” and leave it at that.  It’s a subtle way of saying, “Hey, Christmas is important to me, and maybe it should be important to you as well.”  But that’s about as far as it goes.

Do I think we should all put a big peppermint chip on our shoulders starting the first Sunday of Advent and stomp around just daring anyone to knock it off, then howl “cultural appropriation!” when they do?

Of course not.  The Christmas message is meant for the entire world.  And while committed Christians understand that the Crib leads to the Cross, this most essential aspect of Christmas is pretty much entirely lost to our secular friends and neighbors.  Throwing a hissy-fit because secularists have hijacked Christmas to suit their own materialistic and/or self-satisfying ends doesn’t do anything to promote the salvation of their souls.  We just need to figure out a way to re-direct the world’s attention away from the cash register and back towards the Creche (and ultimately, the Cross).  And, considering that for so many people, a Nativity scene has value only if it can serve as a backdrop for that awesome Christmas selfie to go on Instagram, this is quite a challenge.

A chance to evangelize…just a little, anyway!

Should we, as believing Christians, take advantage of the numerous teaching moments presented to us as a way to share our faith, and just maybe evangelize the lost and unbelieving world which surrounds us?

Here’s an example of one potential “teaching moment:”

“Do you know what the origin of your candy cane is?  It’s based on something called a crozier, the staff carried by Catholic bishops like Saint Nicholas.”

That lead-in sentence, inoffensive and disarming as it appears on the surface, would allow me to enter into a broader discussion on the real St. Nicholas, tying the entire modern and utterly ridiculous “Cult of Santa Claus” back to an authentic historical (and Christian) origin.  Such a conversation isn’t an In-Your-Face/Take-This-Pamphlet type of event.  It’s more of a non-threatening “fun fact” type of thing which nonetheless diverts the listener’s attention back in the general direction of our Christian understanding of Christmas…even if tangentially, and even if only for a moment.

They’re on OUR turf now!

And, of course, the few remaining Nativity scenes I might see in public offer me a similar opportunity for a casual, two to three sentence evangelization opportunity.  In a way, we can consider somebody stopping to admire a Creche (even if only pausing for that all-important Instagram selfie) as having stepped onto “our turf,” and speaking to them in a friendly manner about the display’s meaning is not an intrusion.  If they’re showing even passing interest in the trappings associated with Christendom’s second most important holy day, then in a way, they’re pretty much “fair game.”

Imagine yourself stopping to admire some brightly colored lights strung up for the commemoration of Ramadan.  If you stopped to admire them, and a well-meaning Muslim came up to you and said, “Hi.  Do you know why we celebrate Ramadan?” would you take offense?  Probably not.  If you have any manners at all, you’d probably listen politely, and perhaps even engage in a friendly conversation.

We can take that attitude as well.

IF I have to guts to actually go through with it.