Why I’m no longer attending my Latin Mass Parish weekly

“Take it, lad. You need it more than I do.” – Chaplain George Rentz, giving his life jacket to a seaman following the sinking of USS Houston during the Battle of Sunda Strait, 1942.

Commander George Rentz was a Chaplain aboard USS Houston, a cruiser sunk during a fierce naval battle with superior Japanese forces in the dark days of 1942. Clinging desperately to a hopelessly overloaded piece of wreckage with several other sailors, he relinquished his spot of safety.  Giving his lifejacket to a young seaman with those words, he pushed away, treading water for a while before his strength gave out and he sank below the waves, joining 800 other men from Houston who perished that day. He was awarded the Navy Cross for his action, the only chaplain so honored during the Second World War. 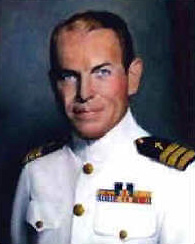 Commander George Rentz was a Navy Chaplain who laid down his life for a fellow Sailor following the sinking of their cruiser in 1942.

Please God that he has received a far greater reward.

Rentz’s words became one of a handful of famous naval sayings which (along with better known phrases like “Don’t give up the ship” or “I have not yet begun to fight”) my Naval Academy classmates and I were ordered to commit to memory over 45 years ago.

It’s funny how those words stick with you. Thinking about it now, those three phrases (which I shouted with gusto as a sweating frightened Midshipman 4th Class whenever prompted by an upperclassman) can apply to us Catholics of a traditional/orthodox bent during these troubling and apocalyptic times for our Church. And surely 2020 will be a year as dark for our beloved Catholic Church as was 1942 for the U.S. Navy, the year Rentz laid down his life.

Hopefully, nobody reading this will be scratching their heads wondering why I lament the state of things in our Church. If you don’t know the situation, you simply haven’t been paying attention. For the rest of us, perhaps those three phrases will seem like good advice.

“Don’t give up the ship!” – I don’t know about you, but there’s no way I’m abandoning the Barque of Peter, no matter how hot the battle. 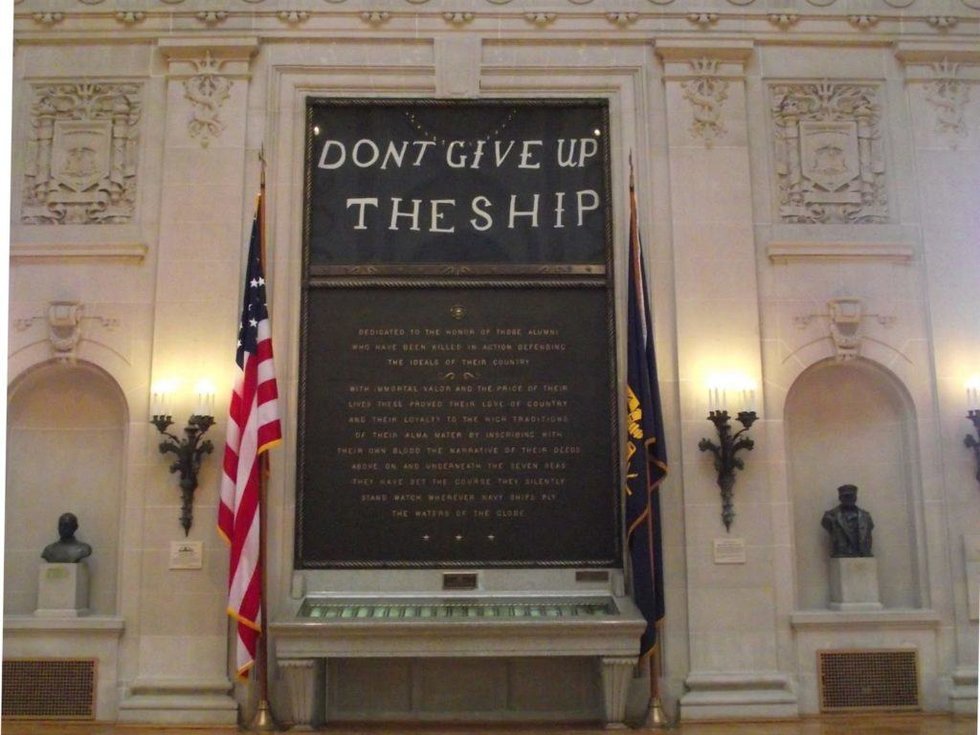 The original battle flag flown during the Battle of Lake Erie now hangs proudly in the rotunda at the U.S. Naval Academy. Those fighting words from the War of 1812 ring true for us Catholics today!

“I’ve not yet begun to fight!” – The enemy is demanding our surrender. Far from complying, we’re about to renew the battle with fierce determination.

My response to the desperate battle facing us is nowhere near as noble or heroic as what that chaplain (only a month away from full retirement) did amidst one of the fiercest naval battles of World War II. It’s really pretty trivial and cheezy in comparison.

My FSSP parish is small. When FSSP was granted permission to have a parish in my city, the small run-down church had been closed and abandoned, stark evidence of Catholicism’s post-Vatican II continual collapse. After three years of effort (including some pretty serious engineering), the building had been restored to its former beauty. The high altar was in place, and all vestiges of the Novus Ordo experiment were gone.

And our little parish began steadily growing. It wasn’t just cranky old timers incapable of “getting with the times,” as the Traditional Mass’ detractors like to paint us. Nope. More and more young families came through our doors. In ten years our little outfit produced five vocations.

The growth was steady but manageable. Then came the Summer of Shame.

When it became evident how rampant the scandals, how deep the rot, how Modernist the hierarchy, and how big the mess confronting our Catholic faith, attendance at my little parish exploded. We ushers saw more and more new faces every week. There were more and more new families showing up. They were curious first-timers, and they had questions which we tried to answer, always encouraging them to come back. 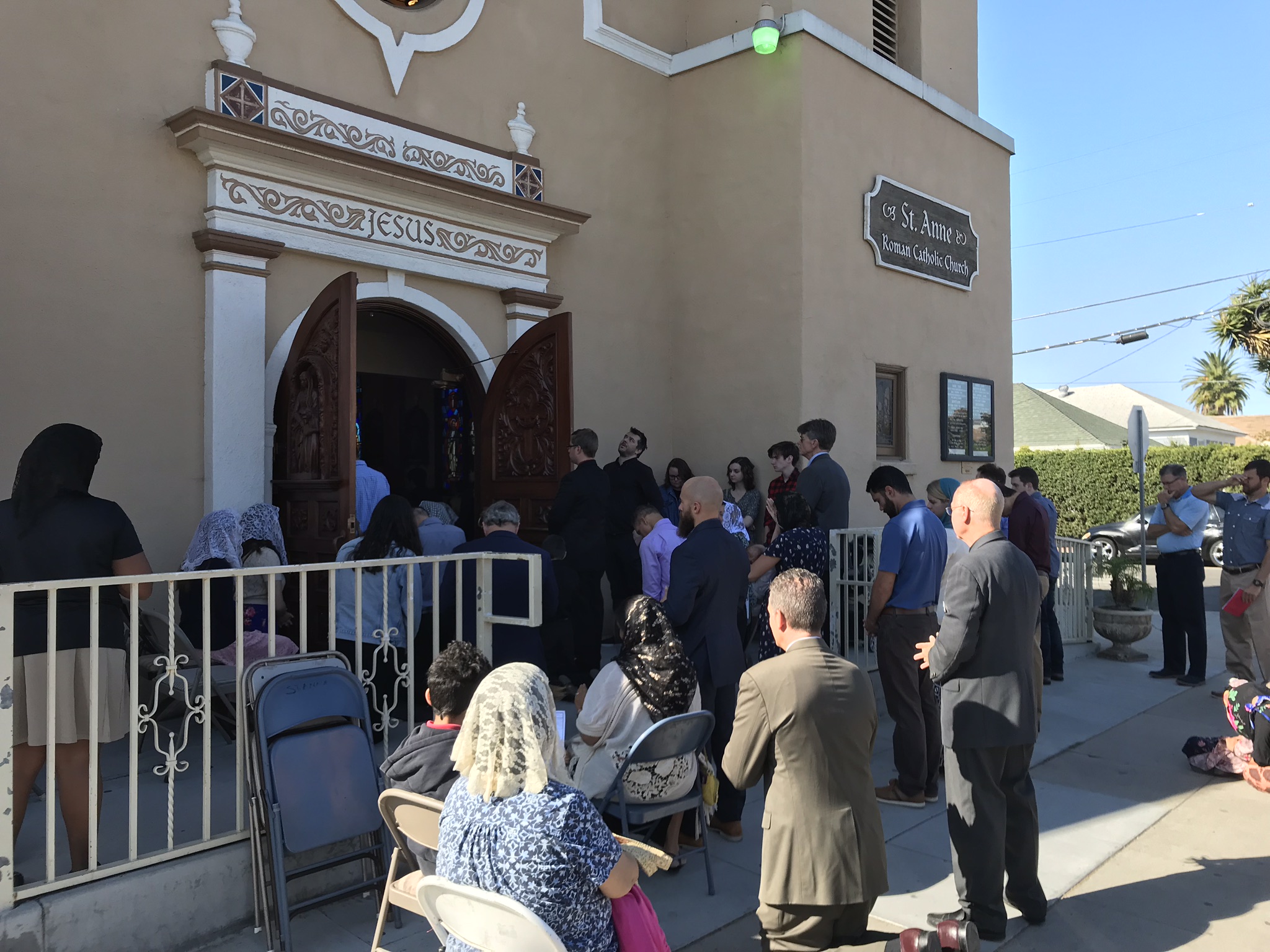 Taking it to the streets: Undaunted, Catholics unable to find a seat at the Latin High Mass carry on.

And, boy, did they come back! Our job as ushers, of course, included finding seats for our parishioners and visitors. These days we look less like ushers and more like those famous Japanese train conductors who have to pack passengers like sardines! Our three FSSP priests laid on additional Sunday Masses to alleviate the strain, but the crowds kept growing. We’re now at the point where if you don’t show up for Mass at least a half hour early, you’re not going to get a seat…at least not in a pew inside the church.

During good weather (which is abundant in our state), we leave the double doors open and set up two rows of folding chairs under a portable canopy. People sit outside, peering in and listening to the homily broadcast on exterior speakers. During the parts of the Mass where you’re supposed to kneel, they kneel uncomplainingly on the concrete sidewalk. We’ve taken two of our classrooms and made them overflow rooms where the Mass is relayed via WiFi onto large screen displays.

These Japanese train conductors have the makings of excellent ushers at my parish’s wonderfully overcrowded Latin Mass!

A first-time visitor to our parish shouldn’t be forced to watch from such disadvantaged locations, so it isn’t uncommon for parish “regulars” to give up their pew for a visitor.

Such is the state of our little Latin Mass parish.

The good news is that we’re not the only place in our city where the Mass is offered in the Extraordinary Form. Two much larger parishes have brave priests who offer the Latin Mass at least once a week, offering their parishioners the opportunity to attend the Extraordinary Form in addition to their regular Novus Ordo Masses. I say these priests are brave for two reasons: first of all, they haven’t had the extensive training which Latin-only outfits like FSSP, ICKSP, and SSPX seminarians go through. The Latin Mass is beautiful, but certainly difficult for a man not trained from the ground up in saying it. Secondly, our city is home to one of the more liberal bishops in America. So far, he has been tolerant of these pre-1969 Masses being said by his diocesan priests. That, of course, could change at any moment.

I’ve attended these Latin Masses, and they are growing as well. They’re both said in very large churches, so there’s still plenty of room. I’d put the attendees at a Novus Ordo parish Latin Mass at about (this is a very unscientific wag) 40% Traddie and 60% Novie. Many, many families are being exposed to the old rite. It’s good to have a significant number of Traddies in the pews there. We act as guides of a sort, I guess. If you’re a Novie Newbie and are struggling to keep up, it’s helpful to keep an eye on the people wearing mantillas and sporting those massive black missals. When they kneel, you kneel. Ain’t nothing wrong with that!

I’ve also struck up a friendship with the pastor of one of these Novus Ordo parishes. He’s a wonderful guy, orthodox in his theology and eager to bring authentic Church teachings to his people. I love encouraging and supporting him. Due to logistical imperatives (dealing with chronically ill family members), my wife and I have been attending separate Masses on Sunday in order to always have somebody at home. She’s been going to this Latin Mass at the big Novus Ordo church for a couple of years now.

I’m still a member of my FSSP parish, and continue to support them financially. I still plan to get there at least once a month. But I think it’s time to give up my pew there to make room for that next confused and battered Catholic who stumbles through the door in search of the genuine Faith which seems to be evaporating before our eyes in far too many places.

To that Novie looking for a pew where they can experience the full beauty of the Traditional Latin Mass, I gladly say, “Take it, lad (or lass). You need it more than I do.”