Some of These Novus Ordo Oddball Masses Deserve Their Own Awards Show! 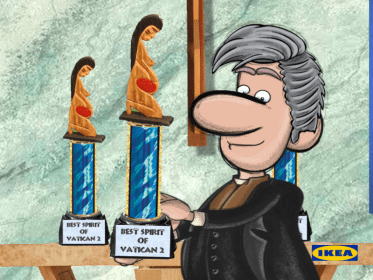 If you’re paying any attention at all, you’ve seen it all too often. Video clips on Twitter, YouTube or other social media depicting some horrendous set of abuses taking place at a Novus Ordo Mass somewhere around the world. The clown masses, balloon masses, giant puppet masses, stand-up comedy routines, skits, and (of course!) liturgical dance-offs.

It’s hard to keep up with all of these Novus Ordo Oddities. One of the very best chronicles can be found at David L. Gray’s YouTube site. (You definitely need to check it out; just don’t do so immediately after eating). But even with Mr. Gray keeping us informed, how can we possibly determine which of these outstanding examples of Novus Ordo Innovation (all done in the highest traditions of the “spirit of the council”) are truly the best of the best?

Well, we here at Catholic Cyber-Militia have just the answer for you: The Novie Awards!

Filmed before a live studio audience at St. Silly’s parish, the Novie Awards recognizes the ground-breaking efforts of liturgical innovators around the world! Receiving a Novie award in recognition for your achievements in novelty, entertainment, and exciting reinterpretations of doctrine is what this show is all about!

And in this, our inaugural episode, we have a clear-cut winner for the first award!